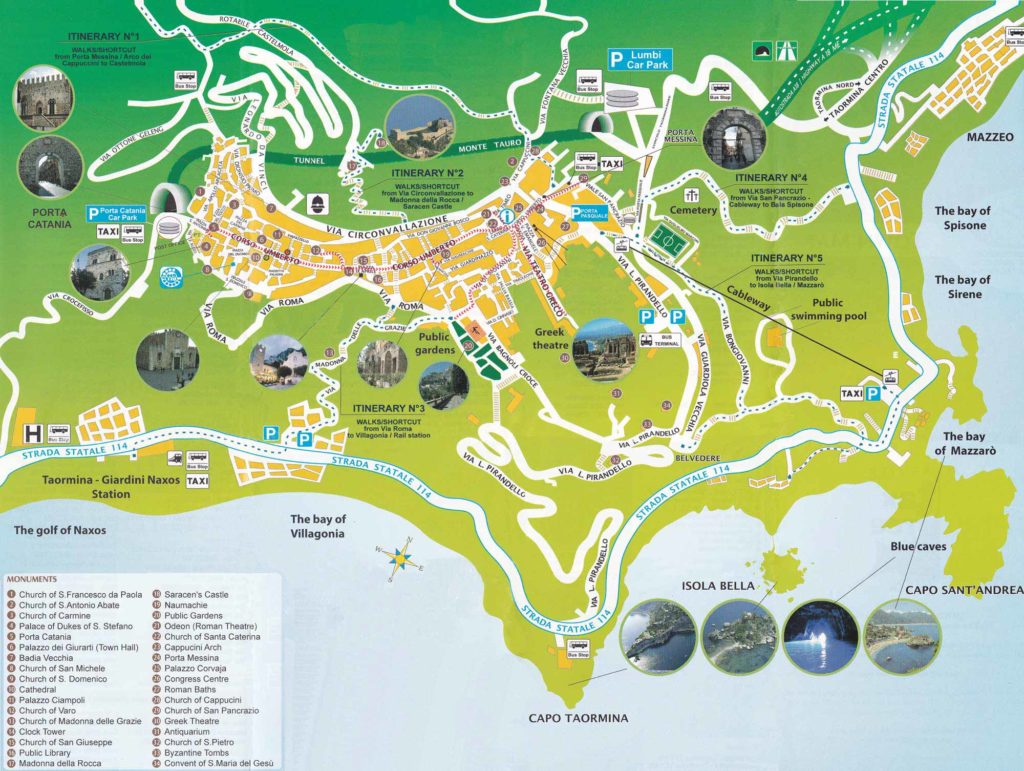 From whatever road you arrive in Taormina, the parking lot where you should stop is Porta Catania. At the exit of it you will make a flight of stairs and you will find yourself in Piazza S. Antonio where Porta Catania (5), which represented one of the medieval accesses to the city, is located. From here begins the Corso Umberto, the main pedestrian street of the ancient and modern city along which you will find the most important tourist attractions to visit. Once past the great arch, on the right you will find the Palazzo Duchi di S. Stefano (4) of Arab origin -normanna but of Gothic finish. The palace is located in the ancient Jewish quarter. Continuing along the Corso: on the right the Piazza del Duomo with the Four Fountains and the Cathedral (10) of medieval origin dedicated to St. Nicholas of Bari. Going ahead on the left, before the Clock Tower, the staircase leading to the Church del Varò (12) whose façade looks austere but the interior is rich in lace making the baroque environment. Going down towards the course you will again come to the Clock Tower, which was the second gateway to the medieval city, beyond which you will find yourself in Piazza IX Aprile which offers a unique view. Around the square you will see the church of S. Giuseppe (15) and the municipal library (16). Continuing along the course you can visit the Naumachia an imposing building that represented an ancient monumental fountain of Roman origin (19) which is located along a staircase that crosses the Corso Umberto. Almost at the end of Corso Umberto there is the Church of Santa Caterina (21), of Baroque style, built on the ruins of the Odeon (21), an ancient Roman theater that you can see behind it. Faces, given the Church of S. Caterina, there is the Greek Theater ascent (30) that will lead you to the second largest Greek Theater in Sicily and the only one to have a view that encompasses Mount Etna and the Giardini-Naxos bia . Laterally, the Church of S. Caterina houses Palazzo Corvaja (25), a wall structure of Arab origin. Leaving Porta Messina (24), another gateway to the city, there is the S. Pancrazio descent that leads to the church of the same name (29) dating back to the 18th century in Baroque style. Next to the church there are some ruins of Roman origin. A dedicated visit is made to the public garden that represented the park of the residence of Lady Florence Trevelyan where the vegetation is dominant and from which there is a unique view.

We use cookies to make sure you can have the best experience on our site. If you continue to use this site we will assume that you are happy with it.OkPrivacy policy